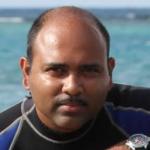 Dr. Dayne Buddo is a marine ecologist with a primary focus on marine invasive species. He is the first Jamaican to have done significant work on marine invasive species, through his graduate research on the green mussel Perna viridis in Jamaica. He currently holds a Bachelor of Science (Hons.) degree in Zoology and Botany (UWI – 1999) and a Doctor of Philosophy degree (UWI-2009) in Zoology – Marine Sciences. Dr. Buddo has served the UWI as Lecturer and Academic Coordinator since 2009, and has been stationed at the UWI Discovery Bay Marine Laboratory and Field Station. He has published several pieces of work on marine invasive species in the region, including the co-authored book on Lionfish Management in the Caribbean. In addition to marine invasive species, Dr. Buddo also has significant research interests in marine protected areas management, seagrass ecology, fisheries management and sustainable development. He has been a consultant for CARICOM, Government of Japan, the World Bank, International Maritime Organization, the Nature Conservancy, among others, and has conducted work in over 30 countries. He has worked closely with the United Nations Convention on Biological Diversity (UNCBD), International Union for the Conservation of Nature (IUCN), United Nations Environment Programme (UNEP), and the Global Environment Facility (GEF), The National Oceanic and Atmospheric Administration (NOAA) among other multilateral agencies. Dr. Buddo currently serves on several national and regional committees that focus on marine invasive species and marine biodiversity. Most recently, he was asked to serve on a global task force for ballast water by the International Maritime Organization. Dr. Buddo has taught courses at the UWI at both the Bachelors level and the Masters level, and has served and continues to serve as a research supervisor for several Masters and PhD students in marine sciences. He is also trained and certified as a PADI Instructor, an Emergency First Response® (First Aid/CPR/AED) Instructor, as well as a Hyperbaric (Recompression) Chamber Operator and Safety Director.
Dayne | Invasive Lionfish Portal